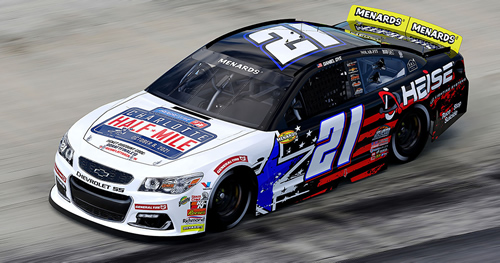 HOLLY HILL, Fla. – Heise LED Lighting Systems® by Metra Electronics® announced on Wednesday that they will be teaming up with Deland, Florida's Daniel Dye and GMS Racing for this week's running of the ARCA Menards Series' Bush's Beans 200 at the legendary Bristol Motor Speedway in Bristol, Tennessee.
Daniel Dye's racecars have featured Heise's parent company, Metra Electronics, since 2018 at numerous short-track venues. This will be the first time Heise LED Lighting Systems will be featured on the quarter panels on the #21 Chevrolet SS. "We couldn't be more thrilled to work with Daniel and have Heise front and center for this race at Bristol," said Jake Bates of Metra Electronics. "Daniel’s Race to Stop Suicide program has been a great cause for our community and we are proud to help support his mission. This week’s race is also a great opportunity to expose viewers to Heise and the wide range of aftermarket vehicle lighting upgrades that we offer," he added.
"It's pretty special to me to have Heise LED on our racecar for one of the biggest races of the season. Everyone from Metra and their team have been huge supporters of ours for years, and to represent Heise LED Lighting Systems at the Bristol highbanks, on national television and radio, is truly a dream come true. I can't thank them enough for the continued support and hope to park that beautiful American themed No. 21 Chevy in victory lane,” says Daniel Dye.
The Bush's Baked Beans 200 marks the last race of the ARCA Menards East Series and the third to last race of the ARCA Menards National Series. Dye is poised to make his run for the ARCA East Championship title with only 24 points separating him from the leader and will attempt to repeat history with the same team that won last year with another GMS Racing driver.
Daniel Dye will take the green flag at the "World's Fastest Half-Mile" this Thursday, September 16th. The race will be televised live on FS1 starting at 6:30 pm EST and on MRN/SiriusXM radio, followed by the Camping World Truck Series' UNOH 200 Presented by Ohio Logistics for a racing doubleheader.
About Heise LED Lighting Systems® by Metra Electronics®:
Heise LED lights feature better construction, inside and out. Known for better, reliable lighting coverage, Heise’s torture-tested, high-performance vehicle and marine lighting accessories are available to authorized Metra dealers around the world. For more information visit us at HeiseLED.com or find us on Facebook or Instagram.
About Metra Electronics®:
Metra Electronics is celebrating its 75th anniversary as “The Installer’s Choice®” for aftermarket automotive products. This US-based manufacturer offers audio, lighting, safety, and installation accessories for modifications to automotive vehicles in addition to powersports equipment, boats, motorcycles, semi-trucks, race cars, and more. Visit us at MetraOnline.com or find us on Facebook or Instagram to learn more.
< Back to all news