Heise® is Now Shipping its Next Generation of LED Lighting Solutions 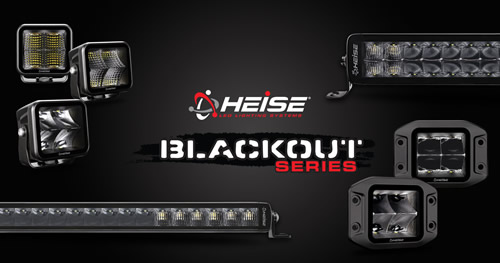 Holly Hill, Fla. – Heise LED Lighting Systems® by Metra Electronics® is now shipping its next generation of Blackout Series lightbars, driving and cube lights, featuring refined frames, cleaner lines, and upgraded optics. The optics have changed from a direct placement to an indirect placement, allowing more control of the location and pattern of the beam. This allows the lights to be tailored to the vehicle, its entire lighting system, and for the driver’s lighting coverage needs. Heise is also shipping its new heavy-duty Edgeless Series of work and driving lights that combine form and function for a sleek appearance that doesn’t compromise performance. Just in time for winter, a heated work LED light has also joined Heise’s new product lineup, and adding to the existing Infinite Series line of RGB backlit lights is a new 5-inch flush mount cube. These new lights were introduced at the 2021 SEMA Show and are now shipping.
Blackout Series Lightbars
A new and improved design and upgraded optics make the latest generation of Heise’s Blackout Series a versatile lighting solution. Function meets style with refined frames and cleaner lines for a sleek yet minimalistic look. The hybrid 90-degree flood and 8-degree spot beam pattern combination delivers intense spotlights in the center flanked by widebeam lights on each side. Available as a dual-row lightbar in 8, 14, 20, 22, 32, 42, and 50-inch lengths, or as a single-row slimline lightbar in 9.5, 20.5, 31.5, 39.5, and 50.5-inch lengths.
Blackout Series Driving Lights and Cubes (Standard and Flush Mount)
Heise’s Blackout Series driving lights and high output cube LED lights are small but powerful for better coverage at night. These lights also have the next-generation improved Blackout Series design with upgraded optics for more control of the location and pattern of the beam. Two IP67 rated options for driving lights feature an intense 15-degree spot beam pattern and 6 LEDs, available in a standard or flush mount option. The IP67 rated cube lights are available in various spot or flood beam patterns, sold as a set, and include the HE-DLWH1 dual light wiring harness for installation. Flush mount options are also available and sold individually without a harness.
Edgeless Series Work and Driving Lights
The new Edgeless Series features lights with a clean, edgeless frame with no screws on the front face for a sleek appearance that doesn’t compromise performance. This new series features four new spot beam pattern lights in 7 or 9-inch round options, the HE-EL3 and HE-EL4, a 4-inch driving light option, the HE-EL2, and a 5-inch work light, the HE-WL5. The new Edgeless Series also features a rectangular work area light with a flood beam pattern, the HE-WLAF.
Heated Work Light
Designed for winter, the heated feature in Heise’s new HE-WL4H light helps to melt the frost and prevent snow from covering the light and reducing visibility. This heavy-duty work flood light is designed for off-road, rugged, and dark night conditions to illuminate the path for a better drive. This 4.3-inch light is sold individually and has a 75-degree flood beam pattern with 9600 raw lumens.
Infinite Series Flush Mount RGB Cube Light
Heise’s popular RGB backlit LED lights, the Infinite Series, now has a flush mount cube light option for the perfect fit inside the bumper. Light colors can be changed with the swipe of a finger, with pure white light and 16 million selectable colors as a backlight, controlled by a smartphone app. The HE-FMICL2 cube light requires Metra’s RGB-CB1 controller, which is sold separately and required for RGB operation. This light is compatible with the entire Heise Infinite Series and can be synced with other Heise or Metra RGB lights that use the same RGB-CB1 controller.
All of Heise’s new lights are now shipping and more information and specifications can be seen at HeiseLED.com. Heise LED lights are sold for off-road use only. These products should not be used on public roads.
About Metra Electronics®
At Metra, 12volt installation and integration is our passion. We strive to continuously offer the highest quality products to meet the fluctuating technological challenges of the automotive world. We actively listen to our customers’ requests and invest resources in developing the highest quality dash kit and harness solutions. We make dash kits for more vehicle applications than anyone else in the world. That’s why we’ve been known as “The Installer’s Choice” ® for more than 75 years. Our other brands include: Axxess®, T-SPEC®, The Install Bay®, Heise LED Lighting Systems®, iBEAM Vehicle Safety Systems®, Shuriken High Performance Batteries®, Raptor®, Ballistic®, AmmoTenna®, Metra PowerSports®, Saddle Tramp®, Metra Marine®and Daytona Lights®. Metra’s expertise in connectivity solutions is also applied to its division of premium AV and surveillance products from MetraAV™. For ordering information and pricing, visit Metra Electronics online at MetraOnline.com or call 386-257-2956.
< Back to all news